Violinists not tuned for Stradivarius

Living next to a music school, I hear talented people practice their already grand skills and add to them every day. On the street, I often walk behind someone humming melodiously and I pick up fragments of conversation about tonality or other musical nerdy-ness, all of which sounds like Ancient Greek tunes to me. Their ears certainly hear things I cannot, which must be a skill they bring to bear when selecting instruments, too.

Musicians have personal methods of selecting their favorite sound when testing an instrument. And one might also assume that an ‘old Italian’ violin, like the Stradivarius from the 1700s, would be what experienced violinists would most gladly select, given the freedom to choose an instrument worth around $10 million.

Scientists now say that the Stradivarius has no secret, magical sound that makes it the most memorable for  violinists. A French-American research team convinced 21 experienced violinists attending a competition to play instruments and pick favorites. They had managed to include some rare violins, which they organized on loan. The musicians had to wear special goggles so it became impossible for them to see if they were playing a new instrument or one that is centuries old, famous, and invaluable.

In two types of testing arrangements the Stradivarius was the least-preferred instrument of three old violins and three new models. The results are “a striking challenge to conventional wisdom,” write the researchers in the journal Proceedings of the National Academy of Sciences.

To motivate competitors to go to a hotel room and play an instrument practically blind-folded, they told the volunteers they would have the chance to play fine violins, and at least one Stradivarius. The volunteers were not told the violin’s make. A dab of scent was placed under each violin’s chinrest to disguise any characteristic smell. The musicians were supposed to play and listen for range of tone colors, projection, playability, and response. 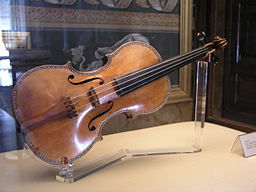 Of the six violins, three were new models. The scientists had on loan two violins from around 1700 and 1715 by celebrated craftsman Antonio Stradivari and a third was from the hand of Giuseppe Guarneri del Gesu, another violin master from the Golden Age, and which dated to 1740. For each test run, the researchers gave the volunteers pairings of one new and old violin, a fact they did not disclose to volunteers.

In one test series, mimicking instrument-shopping, violinists had 20 minutes to choose their instrument they would most likely take home to test further. In a second experiment, the musicians had only one minute to play one violin and then the other before choosing a favorite.

In the longer test, whenever the older Stradivarius was one of the two possible violins to choose from, the players rejected it, leading the scientists to note “its consistent rejection appears to drive the overall preference for new violins…”

In the short testing, violinists consistently preferred a particular new violin. It was chosen eight times as the take-home model, while the older Stradivarius was chosen only once. A punishing 16 times that precious violin was named “worst-in-a-category,” the researchers write.

Overall, eight of the 21 violists chose an old violin as their favorite. Given the small test group the scientists warn this result cannot be generalized. At the same time, that fact that a new violin won over Stradivarius and Guarneri del Gesu in the view of 13 musicians in the study “stands as a bracing counterexample to conventional wisdom.”

The new violins got high marks for playability and response but there appeared no difference between the violins in terms of projection and tone colors. An amount of “uncertainty” in the results remains.

Only three musicians were able to correctly guess they were playing an old violin, which, according to the researchers, shows that the instruments dating back to the Golden Age of violin-making do not have “special playing qualities.” The scientists point out that the violinists chose favorites only by playing them and not by listening to the instruments from a distance.

Irrespective of the results, the scientists assert that old Italian violins will “no doubt maintain their hold on the imagination of violinists and their audiences for a long time to come.” As scientists, they hope their results will shift the focus of research away from a seeming “secret” the Stradivarius might hold to achieving a better understanding of what exactly musicians’ ears are hearing as they evaluate instruments.

This team, unlike other researchers before them, does not believe there is evidence the violins by Italian masters have better qualities due to varnish properties, the effect of the Little Ice Age on the wood, chemical treatment of the wood or plate-tuning methods, to name a few of the attributed traits thought to lend these violins superiority.

The Naked Scientists, a group of physicians and scientists at Cambridge University, write in their blog that despite the small study sample, the study “seems to suggest that the reputation of the greater masters’ violins relates more to the price tag than the sweet music they make.”

In a discussion on a violinists’ blog a few years ago, there is an impassioned discussion on the merits of ‘old Italians.’ Perhaps this new study does not quite settle this long-running discussion. And the one about young violins is just beginning. Anne McKinley writes that modern violins can make their players “happy, or unhappy, at any price range.” In that sense, she says, they are in some ways “like modern chairs.”